Home Cliff Jones A Comedy Of Terrors. ,We, The Audience, Have No Cause To Laugh.
Cliff Jones

A Comedy Of Terrors. ,We, The Audience, Have No Cause To Laugh.

A Comedy Of Terrors.
We, The Audience, Have No Cause To Laugh.
Out of approximately 160,000 Tory voters just over 80,000 voted for Truss to be our Prime Minister and just over 60,000 voted for Sunak. 80k? You could get that many in a football ground. What’s more, not all Tory members bothered to vote. And it would seem that a sizeable number want de Piffle back on the throne. My guess is that some of them will have voted Truss simply because with no opportunity to vote for Johnson they chose the one who declared her loyalty to him. Courtesy of Maria Nikolakaki and her book on the subject, I have been thinking about Neoliberalism; thinking about where to draw the line between ideology and theory, one avoids being tested and one demands to be tested; about a general unawareness of organised exploitative forces; and about the capture of education as part of a scheme of capitalist indoctrination. Meanwhile, our rulers, who might have difficulty spelling Neoliberalism, but who are, nevertheless, fully committed to it, even children of it, have offered us a poor and unfunny comedy. Do they seriously believe that we are stupid enough to think that we have been witnessing a democratic process? Yes they do! It is for us to tell them that we are not fooled. Shrugging our shoulders in the pub will not be enough. We have voices, but they are quietened. Who has Socialism’s Megaphone? 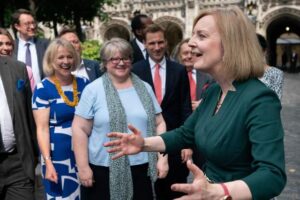