Women who made a difference – Wangari Matthai.

In my previous articles I have looked at women who have had an effect on politics during the 18th., 19th. and 20th. centuries in Europe. So I would like to shine a light on the work of an African lady active into the 21 st. century. She is Wangari Maathai whose list of awards from around the globe is immense.

Wangari was born in Kenya in 1940, from the Kikuyu tribe, and brought up on a white owned farm in the Rift Valley. Her upbringing there gave her a strong interest in conservation. More importantly her father allowed her to join in family discussions and express opinions, rare in the male-dominated society at the time.

Educated at a Catholic Boarding school she was sheltered from the troubles of the Mau Mau uprising. She was sent to the United States and Germany to complete a master’s degree in Biology and a doctorate. Returning to Kenya she became the first woman to receive a PhD there and went on to be the first woman to become chair of Veterinary Anatomy Nairobi University.
The move to export more cash crops such as timber caused large scale deforestation in Kenya from the 1970s. 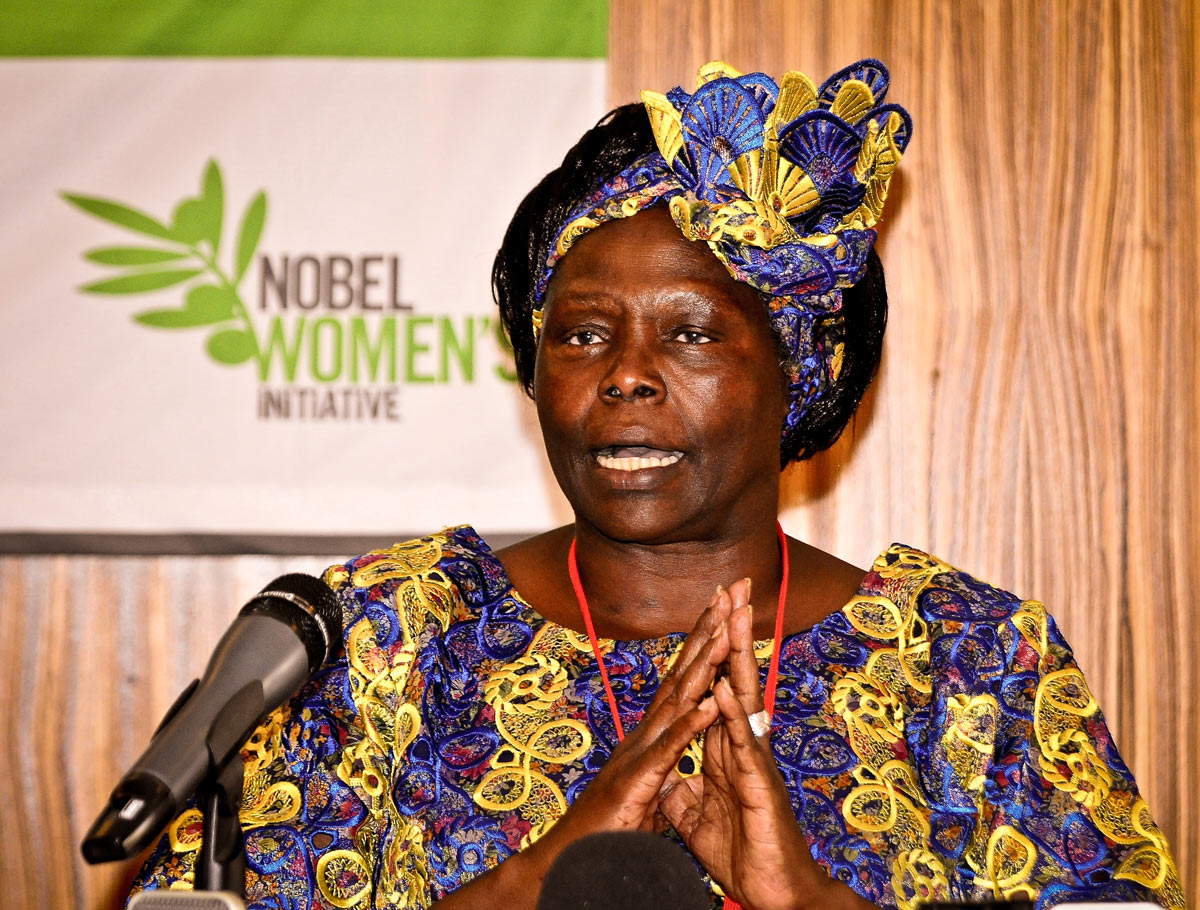 Coupled with some severe droughts there were severe shortages leading to inter tribal conflict with people fighting over meagre resources. Wangari saw that tree planting would help to reverse the problems and find some employment. She started a movement called Green Belt, which with the backing of the Norwegian Forestry Society has supported conservation projects across Africa.

In the early 80s she was elected chair of The National Council of Women of Kenya (NCWK). This gave her a platform to expand her ideas on conservation and also empower women.

Under President Moi in 1982 Kenya became a one party state. Wangari as a pro democracy activist joined in protests against the regime. In one protest, a hunger strike against building on a public park she was injured along with other protesters when they were forcibly removed. Undeterred she continued to fight for democracy becoming vice president of the Movement for Free and Fair elections. She was elected to Parliament in 2002 when the Rainbow Coalition defeated the incumbent government and was appointed Assistant Minister for Environment.

In 2004 her work was recognised by the world as she was awarded the Nobel Peace Prize for “her contribution to sustainable development, democracy and peace”

In so doing she became the first African woman, and the first environmentalist to win the prize. Chair of the Nobel Prize committee, Ole Danbolt Mjos said “Maathai stood up courageously against the former oppressive regime in Kenya. Her unique forms of action have contributed to drawing attention to political oppression—nationally and internationally. She has served as inspiration for many in the fight for democratic rights and has especially encouraged women to better their situation.”

There is far more to say about this extraordinary woman than I can do justice to in this short article. Her record speaks for itself: Honorary doctorates in 15 universities around the world and over 50 awards from 11 countries. Although she succumbed to cancer aged 71 in 2011, her work goes on through many organisations for peace and the environment, including the Millenium Goals Advocacy Group and the Wangari Maathai Institute for Peace and Environmental Studies  (WMI). The WMI will bring together academic research – e.g. in land use, forestry, agriculture, resource-based conflicts, and peace studies—with the Green Belt Movement approach.

I will finish with her words quoted in a book Speak Truth to Power: Human Rights Defenders Who are Changing Our World edited by Nan Richardson.
‘Throughout Africa (as in much of the world) women hold primary responsibility for tilling the fields, deciding what to plant, nurturing the crops, and harvesting the food. They are the first to become aware of environmental damage that harms agricultural production: if the well goes dry, they are the ones concerned about finding new sources of water and those who must walk long distances to fetch it. As mothers, they notice when the food they feed their family is tainted with pollutants or impurities: they can see it in the tears of their children and hear it in their babies’ cries.

COMING SOON TO A CROWDED CINEMA NEAR YOU!