Ellen Wilkinson – Women who made a difference

I would like to look at a few women who made a real difference in political life and are often, if not ignored, relegated to ‘also rans’ for their contributions.

My knowledge of this subject is limited, so I was grateful to come across a book review in the the New Internationalist about Ellen Wilkinson (1891-1947) entitled ‘Red Ellen’ by Laura Beers (Harvard University Press). Having read the review, which ends ‘…I had never heard of Ellen Wilkinson. Now I wish I could have met her’. So it will be on my Christmas list for my family to buy me.

Ellen was born into a Methodist family in Ardwick, Manchester. Bored with religion and although her father was a supporter of the Conservative Party she joined the Independent Labour Party, aged 16. Despite ill health she studied hard and with the help of scholarships got to Manchester University to study History.

Politics now became the passion in her life. So I will confine myself to briefly listing the causes she became involved in and whet your appetite to learn more about this remarkable woman, diminutive in stature, but a colossus in what she achieved.

Ellen became active in the suffragette movement, and continued to fight for equal rights for women throughout her life. She was a pacifist and against conscription in the First World War. She was one of the first trade union officials in the early 20th. Century and was elected onto the Manchester City Council in 1923. Then a year later was elected MP for Middlesbrough East and in 1929 was elected Parliamentary Secretary to the Minister of Health. However she fell out with Ramsey McDonald over the creation of a National Government and lost her seat in the 1931 elections. Her view of Labour’s loss of power then was ‘it was not socialist enough’. ( 85 years later people have similar views perhaps?)

She spent the next few years writing books on politics and news articles and forming ties with the left wing of the party, leader Stafford Cripps, helping form the Socialist League in 1932. Other members included Aneurin Bevan and the lady he later married, Jenny Lee, who would be another woman whose achievements should be more revered.

Ellen was re-elected to be MP for Jarrow in 1935 at a time when 80% of insured people were unemployed! She helped organise the march of unemployed to Westminster and later wrote about the ‘Jarrow Crusade’ in a book called ‘The Town That Was Murdered’. 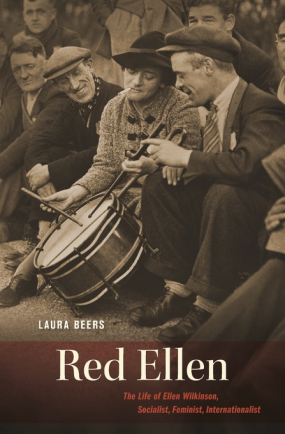 With Clement Attlee and others she visited Spain to support the Republican forces against Franco and reported on the bombings in Valencia and Madrid. She was fiercely critical of imperialism and visited Gandhi in India and supported his vision of independence.

Although a fire-brand socialist she was also a pragmatist and found practical ways of helping the poorest in society. This included in 1938 getting the Hire Purchase Act passed making terms published and limiting interest charged. The list goes on from, introducing air raid shelters in the war, to the School Milk Act in 1946. As a member of Sir Clement Atlee’s cabinet she became the first woman Minister of Education. She wanted to raise the school leaving age to 16 but had to settle for 15. She was at odds with some of her colleagues over going for full comprehensive education. It was a time of re-building after the war and the pragmatist in her saw the establishment of a tri-partite system would enable more social mobility without the cost of building huge new schools. ( she never heard of PFI thank goodness some might say!)

Sadly worn out with a life time of ill health she succumbed to a bronchial disease, and died in 1947 after an overdose of medication, which the coroner at her inquest declared was accidental.

Tribute from Violet Markham, 9 February 1947 “Ellen Wilkinson was small in stature, but there were occasions when she dwarfed her colleagues by the tenacity with which she stood up for the principles she held to be right”.

The Word from On High