Women who made a difference – Millicent Fawcett

There is a saying that ‘comparisons are odious’. History can be viewed through different lenses, so comparing the contributions of Mary Seacole to those of Florence Nightingale in raising the status of women is wrong, both should be honoured for their inspirational achievements. Similarly the contributions to social change of Millicent Fawcett should not be put against those of Emmeline Pankhurst.

Millicent came from a prosperous middle class home in Suffolk and benefited from being privately educated. She had a great interest in literature and education, which lasted all her life. Millicent claims to have been interested in universal suffrage from a young age, but aged 19 she listened to a speech by Jon Stuart Mill advocating women’s suffrage, became a supporter and of him. As a result she met a radical MP for Brighton, Henry Fawcett, whom she worked for as a secretary and later married. She became well known as speaker covering political and academic subjects including women’s issues, particularly working for better access to higher education. Millicent became the co-founder of Newnham College, Cambridge.

Millicent wrote a short book, ‘Political Economy for beginners’, which was praised for its succinct and direct explanations. She wrote two novels and numerous leaflets on political issues. Her capacity to simplify complex arguments, coupled with a clear speaking voice made her an effective suffragist, which attracted many to the cause.

However it was only after her husband’s death, leaving her a widow aged 38, that she devoted more time to political campaigning, working first with the Personal Rights Association who were helping to protect vulnerable women. Then in 1897 she became president of the National Union of Women’s Suffrage Societies (NUWSS) a position she held until 1919. The organisation was democratic, aiming to achieve women’s suffrage through peaceful and legal means, in particular by introducing Parliamentary Bills and holding meetings to explain and promote their aims. The movement split in 1903 with the formation of a more militant organisation, the Women’s Social and Political Union (WSPU), who became known as the suffragettes.

This did not stop the growth of the NUWSS, who by 1904 had over 100,000 members, drawn largely from middle classes but with some working class members and unlike the WSPU it had male members. 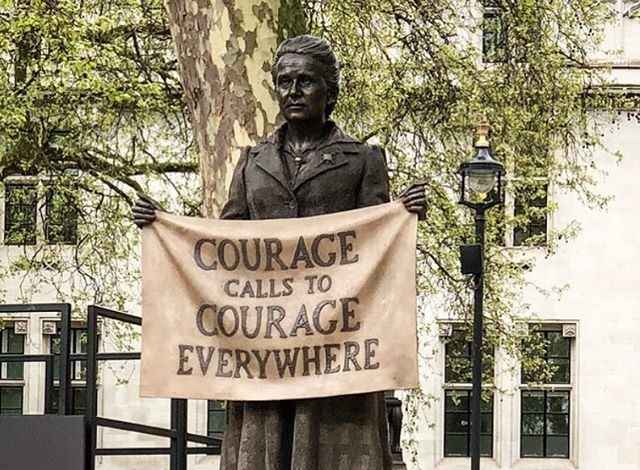 In 1901 she was appointed to lead the British Government’s commission to South Africa to investigate conditions in concentration camps that had been created in the wake of the Boer War and exposed by a heroic campaigner Emily Hobhouse. The Government thought that the Commission would fend off criticism, but it confirmed everything that Hobhouse had said. If anything the Commission’s recommendations went even further. The Commission insisted that rations should be increased, additional nurses be sent out, and other measures to improve conditions in the camps. Millicent Fawcett was quite blunt in expressing her opinions.

Over her career she backed countless causes, not always with success at the time. She fought against child abuse, for better treatment of unmarried mothers, the exploitation of prostitutes and the double standards with regard to men involved. She took an interest in Indian affairs speaking against child marriages and for the introduction of regulated prostitution there.

When the Liberal Government failed to grant women the vote whilst they were in power from 1901-1914 there was an increase in direct action from suffragettes. This willingness to resort to violence caused a split in the women’s movement. Whilst Millicent believed in constitutional means and thought militancy was counter-productive she admired the courage of the militant suffragettes. The NUWSS tired of the Liberals intransigence and in 1912 supported the newly formed Labour Party.

The outbreak of World War brought further divisions in these two movements. Most of the WSPU supported the war and Emily Pankhurst encouraged young men to join. There were many pacifists in the NUWSS but Fawcett encouraged women to help with the war effort once hopes of peace were gone, saying ‘we have another duty now….Let us show ourselves worthy of citizenship, whether our claim to it be recognised or not’.
After the war there was a change in the social and political landscape and in 1918 women over 30 were given the vote. In 1928 Parliament equalised the voting age so although she died a year later Millicent lived to see her dream realised from her hearing J.S. Mill introduce his suffrage amendment to the Reform Bill in 1867.

Just as Martin Luther King and Malcolm X were two sides of the same coin so were Emmeline Pankhurst and Millicent Fawcett.

A message of economic and ecological hope