As Amnesty International have put it:

” This hearing is the latest worrying salvo in a full-scale assault on the right to freedom of expression.”

“This hearing is the latest worrying salvo in a full-scale assault on the right to freedom of expression. If Julian Assange is prosecuted it could have a chilling effect on media freedom, leading publishers and journalists to self-censor in fear of retaliation,” said Amnesty International’s Europe Director, Nils Muižnieks.

“If Julian Assange is extradited it will have far reaching human rights implications, setting a chilling precedent for the protection of those who publish classified information in the public interest.”

The US extradition request is based on charges that stem directly from the publication of classified documents as part of Assange’s journalistic work with Wikileaks. Publishing such information is a cornerstone of media freedom and the public’s right to access public interest information, and must be protected rather than criminalized.”

The case will begin at the Old Bailey, London, at 9.30am on Monday 7th September. Stefan Simanowitz will be outside the court with an Amnesty International spokesperson. Follow @StefSimanowitz for updates and analysis

Amnesty will have trial observers monitoring remotely the entire series of hearings. During the first week, Sebastian Elgueta (@sebelgueta), a UK based barrister, will be monitoring.

Amnesty International also has concerns with regard to Julian Assange’s physical and mental well-being, particularly with the spread of COVID-19.

“Conditions in UK prisons and detention centres are substandard. It is imperative that health and safety protocols are put in place to reduce the risk of COVID-19 infection, while ensuring that prisoners’ and detainees’ rights are protected. Bail or release should be considered for any detainee or prisoner who has serious underlying health conditions and is particularly at risk of infection.”

“Future generations of journalists will not forgive us if we do not fight extradition.”

He goes on to say: “Let’s imagine a foreign dissident was being held in London’s Belmarsh Prison charged with supposed espionage offences by the Chinese authorities.

“And that his real offence was revealing crimes committed by the Chinese Communist Party – including publishing video footage of atrocities carried out by Chinese troops.

“To put it another way, that his real offence was committing the crime of journalism.

“Let us further suppose the UN Special Rapporteur on Torture said this dissident showed ‘all the symptoms typical for prolonged exposure to psychological torture’ and that the Chinese were putting pressure on the UK authorities to extradite this individual where he could face up to 175 years in prison.

“The outrage from the British press would be deafening.

“There would be calls for protests outside the prison, solemn leaders in the broadsheet newspapers, debates on primetime news programmes, alongside a rush of questions in parliament.

“The situation I have outlined above is nearly identical to the current plight of Julian Assange.” Mr Oborne said.

The Old Bailey extradition hearing next week marks a profound moment for British journalists. Assange faces 18 charges under the US Espionage Act, which carry a potential sentence of 175 years.

But his case represents an attack on journalism and democratic accountability. If Britain capitulates to Trump’s America, the right to publish leaked material in the public interest could suffer a devastating blow.

The British authorities have it within their power to refuse this extradition. Indeed, more than 160 legal experts have written to the Government over this. claiming they are obliged by international law to refuse the US request.

These lawyers are joined by human rights campaigners and health professionals, who have been shocked by Assange’s treatment in British custody and fear his rights will be further violated if he is sent to the US.

The National Union of Journalists supports Assange. General Secretary Michelle Stanistreet has warned that the charges pose a threat that could “criminalise the critical work of investigative sources”.

And yet there has hardly been a sound from the British press.

There are many reasons for this relative silence, but before addressing them, the gravity of the situation at hand must be highlighted in the clearest of terms.

Assange is accused by the US of conspiring with whistleblower Chelsea Manning to hack a Pentagon computer. The US indictment says Assange agreed to attempt to crack a password (an attempt which was unsuccessful). Crucially, the indictment also charges Assange with actions that are no different to the standard practices of journalism.

For example, the indictment alleges that “Assange and Manning took measures to conceal Manning as the source of the disclosure of classified records”, as any professional journalist would.

It claims that “Assange encouraged Manning” to provide the information. Again, this is how a journalist would act.

Kenneth Roth, executive director of Human Rights Watch, made the situation clear: “It is dangerous to suggest that these actions are somehow criminal rather than steps routinely taken by investigative journalists who communicate with confidential sources to receive classified information of public importance.”

To criminalise the protection of sources will stop whistleblowers coming forward and will put journalists and publishers at risk.

We need look no further than Manning’s own leaks to realise what a loss this would be. It was Manning who provided the so-called Iraq and Afghanistan war logs published by Wikileaks in 2010 and revealed the atrocity of US helicopter gunmen laughing as they shot at and killed unarmed civilians in Iraq.

Fifteen individuals were killed in the attack, including a Reuters photographer and his assistant. The US military refused to discipline the perpetrators of this grotesque crime. This was a story of momentous importance.”

How legal and honest is the treatment of Assange by the British courts? Below is an example.

Westminster chief magistrate Lady Emma Arbuthnot made two key legal rulings against WikiLeaks founder Julian Assange in February 2018, which ensured he would not be able to take up his asylum in Ecuador.

Around this time, her husband, Lord James Arbuthnot, a former Conservative defence minister with links to the British military and intelligence establishment, was working closely with the neo-conservative Henry Jackson Society (HJS), a pressure group with a strongly anti-Assange agenda. Lord Arbuthnot has hosted and chaired events for the HJS at the House of Lords and long sat on its “political council”.

In any just society that would surely be grounds to halt the trial yet very little mention of this is heard in the main stream media. Yet, if a precedent is set by, Assange being extradited to face a life sentence or worse in the USA, it means that any regime anywhere around the world can stop a free media by the same means. Saudi Arabia, Israel, Russia, China…anywhere.

This battle between freedom and the authoritarian streak is a long one. In the 17th century one of the leaders of the Levellers, John Lilburne, said this: 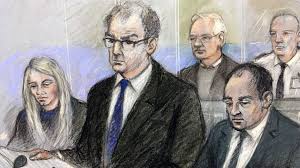 For more information turn to https://thewordmedia.org/wp-admin/post.php?post=5394&action=edit