The Gambling Commission’s annual report for 2017 shows very high levels of gambling among children in the UK. There are more children gambling than smoking or taking drugs, and totally inadequate online protection, and amazingly this has been worse in previous years. Children are also exposed by the increasing links between TV sport and gambling ads and sponsorship. The shocking survey showed the following problem areas, and surprising degree of interaction children find themselves passively experiencing, through smart devices, apps, social media and also TV.

BBC research last year found that 95% of British football matches on TV featured at least one gambling commercial during ad breaks. More than 90% of 12- to 15-year-olds watch TV for 14.5 hours a week

Regulation is not currently working to protect children even though gambling companies have been banned since 2007, from advertising in media that is specifically for children or young people, including on YouTube channels and gaming sites. To spite this 70% of young people say they have seen gambling adverts on social media, and two-thirds have seen them on other websites. Our traditional TV channels are also to blame though, BBC research last year found that 95% of British football matches on TV featured at least one gambling commercial during ad breaks. More than 90% of 12- to 15-year-olds watch TV for 14.5 hours a week.

What is also emerging is a picture of a generational gap in general knowledge and understanding of the internet, and total lack of capacity to regulate the subtleties of internet use by parents. For example, thousands of children and young people are losing money on websites which allow them to trade virtual items through online role playing games. 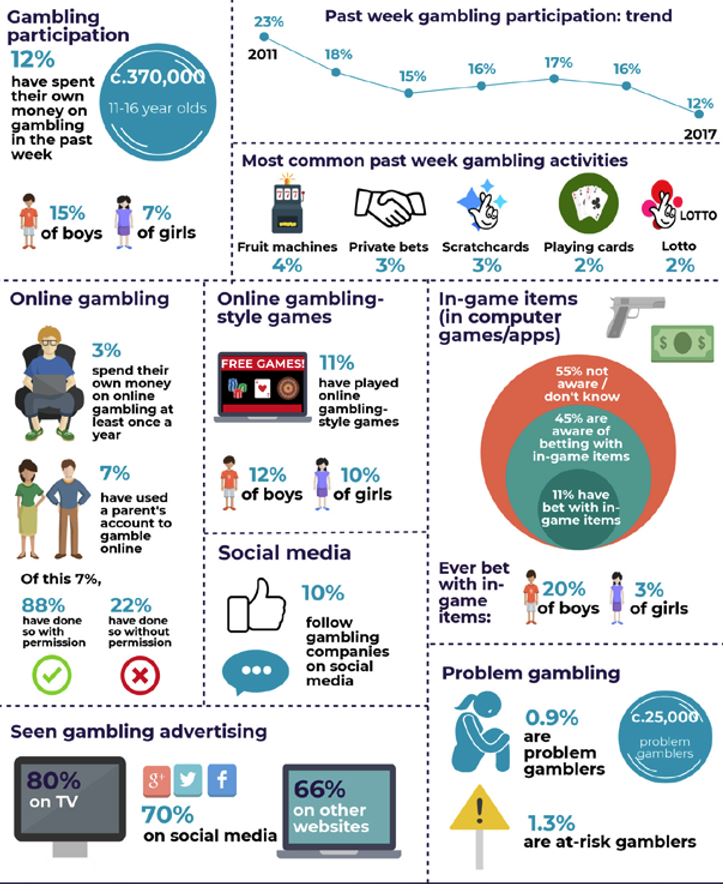 The items – guns, clothes, cars etc within the games can be won or bought as upgrades, and swapped like a new “skin” for the character. In a newly emerging trend though, they then get used as a proxy currency to place bets. “Skin gambling” has for the first time been surveyed by Gambling Commission, who found that 45% of 11-16 year-olds were aware of “skin betting and that 11% of 11-16 year-olds had placed bets using in-game items.

In a worrying evolution of the practice third party sites are now offering a totally unregulated access to young gamblers to place bets using these virtual items. Anecdotal evidence is also emerging that gambling ads are reaching children of all ages through online content. For example, Heather Wardle, assistant professor at the London School of Hygiene and Tropical Medicine has been researching the public health issues of modern gambling for some time. Due to her research, her iPad algorithm has recently thrown up gambling ads even when the viewed content was toddler focused such as “the night garden”.

In the wider social context we have to ask “how has the profit motive again been able to jeopardise the future health of tens to hundreds of thousands of young people?”. We’ve seen in recent months and years since Blair onwards that well informed money makers have always seemed to stay several steps ahead of our “societal protectors” – the government. Banks, housing, wages, recently construction companies and of course, gamblers, after all just a more localised form of stock market, are well in on the act. I would argue that it’s not possible to run two opposing systems in parallel. The Tories would pretend that we need (complex, long winded) investigations, recommendations and gradual changes in the law. We know from the train crashes of the early noughties that “Value of Life” calculations are balanced against safety expenditure in private industry all the time, your safety – our safety – has become a fringe accountancy offset, the cost of safety Vs how much profit we generate as consumers, and unsurprisingly, we are not often happy to learn just how little life is worth when that factor starts to eat into profits. We need a system which starts from what we need, not how we can satisfy other people’s greed for wealth beyond our dreams.

Pauline town is licensee at the station hotel